I recommend you read the previous posts in this series before continuing you continue reading because each post builds upon the previously explained principles. Series homepage.

Recall from the previous post that classification is discrete regression. The target $y^{(i)}$ can take on values from a discrete and finite set. In binary classification we only considered sets of size $2$, but classification can be extended beyond that. Let’s look at the complete picture where $y^{(i)} \in {0, 1, \ldots K}$.

The model we build for logistic regression could be intuitively understood by looking at the decision boundary. By forcing the model to predict values as distant from the decision boundary as possible through the logistic loss function, we were able to build theoretically very stable models. The model outputted probabilities for each instance belonging to the positive class.

However, in multiclass classification it’s hard to think about a decision boundary splitting the feature space in more than 2 parts. In fact, such a plane does not even exist. Furthermore, the log loss function does not work with more than two classes because it depends on the fact that if an instance belongs to one class, it does not belong to the other. So we need something else.

Let’s look at where we are thus far. A schematic of polynomial regression:

A corresponding diagram for logistic regression:

In this post we will build another model, which is very similar to logistic regression. The key difference in the hypothesis function is that we use $\sigma$ instead of sigmoid, $g$:

As I just mentioned, we can’t measure distances over a single “class dimension” (by which I mean the probability of an instance belonging to the positive class). Instead, for multiclass classification we think about each class as a separate channel, or dimension if you will. All of these channels are accumulated in an output vector, $\hat{y} \in \mathbb{R}^K$.

Let’s take a look at what such a vector would look like. For convenience, we define a function $T(y): \mathbb{R} \rightarrow \mathbb{R}^K$ which maps labels from their integer representation (in $0, 1, \ldots k$) to a one hot encoded representation. This function takes into account the total number of classes, $3$ in this case.

In Python $T$ could be implemented as follows:

If you don’t yet see why this would be useful yet, hang on.

Building the model: the softmax function

Up until now $x \cdot \theta$ has always had a scalar output, an output in one dimension. However, in this case the resulting value will be a vector where each row corresponds to a certain class, as we have just seen. While this could be achieved by initializing $\theta$ as an $n \times K$ dimensional matrix, which we will also do, the dot product would be of little meaning.

where $\theta_j \in \mathbb{R}^m$ is the vector of weights corresponding to class $i$. $p$ is the probability. For more details on why that is, refer to this document, section 9.3.

The hypothesis function $h$ yields a vector $\hat{y}$ where each row is the probability of the input $x$ belonging to a class. For $K = 3$ we have

See how $T$ fits into the picture?

To get a final class prediction, we don’t check if the number exceeds a certain threshold ($0.5$ in the last post), but we take the channel with the highest probability. In mathematical terms:

One thing I would like to point out here is that

This is obvious because the sum of numerators in $h$ is equal to the denominator, by definition.Intuitively, the model is $100\%$ sure each instance belongs to one of the predefined classes. Furthermore, because $\exp$ is, of course, an exponential function, large elements in $\theta^Tx$ will be “intensified” by $\sigma$ to get a higher probability, also relatively speaking.

When implementing softmax, $\sum_{j=1}^k \exp(\theta_j^Tx)$ may be very high which leads to numerically unstable programs. To avoid this problem, we normalize each value $\theta_j^Tx$ by subtracting the largest value.

This normalization step has no further impact on the outcomes.

For the sake of completeness, here is the final implementation for the hypothesis function:

Negative log likelihood is yet another loss function suitable for these kinds of measurements. It is defined as:

When I first encountered this function it was extremely confusing to me. But it turns out that the idea behind it is actually brilliant and even intuitive.

Let’s first look at the plot of the negative log likelihood for some arbitrary probabilities. 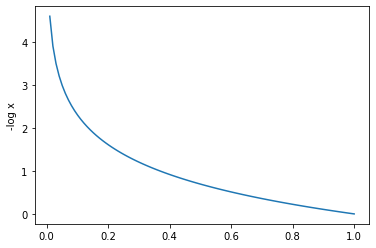 As the probability increases, the loss decreases. And because we only take the negative log likelihood of the current class, $y^{(i)}$ in the formula, into account, this looks like a nice property. Moreover, when we maximize the probability for the correct class, we automatically decrease the probabilities for other classes because the sum is always equal to $1$. This is an implicit side effect which might not be obvious at first.

We always want to get the loss as low as possible. The negative log likelihood is multiplied by $-1$, which means that you could also look at it as maximizing the log likelihood:

preds[np.arange(m), y] indixes all values of preds for each class of y, discarding the other probabilities.

If you would like to play around with the concepts I introduced yourself, I recommend you check out the corresponding notebook.

You now have all the necessary knowledge to learn about neural networks, the topic of next week’s post.